Check out the new trailer for the Tres Vidas show – the first of our Virtual Library presentations to be made available to schools, community groups, colleges and universities. Book now for your fall semester!

The Core Ensemble is deeply grateful to the PNCBank Arts Alive Program for its recent donation! This funding will help us create a Virtual Library of our Music Theatre Pieces such as Tres Vidas, that Celebrate Diversity and Social Justice. Over the coming year, our Virtual Library will be made available to schools, community groups, colleges, and universities. A wonderful gift that arrived at just the right moment!

This week we celebrate the Jamaican writer and poet Claude McKay. McKay was a seminal figure in the Harlem Renaissance literary movement. His father was of Ashanti descent; his mother traced her ancestry to Madagascar. Some of his poems and novels express a longing for “the old familiar ways” of his homeland.

Claude McKay was born on September 15,1889. McKay is a figure from the Core Ensemble Show “Of Ebony Embers”, celebrating the lives of great African-American poets & artists. Please enjoy this video of actor Dracyn Blount reading his most famous poem:

Claude McKay’s novels and poems offer a vivid depiction of life in Harlem:

“I hear the halting footsteps of a lass

In Negro Harlem when the night lets fall

Its veil….Ah, heart of me, the weary, weary feet

In Harlem wandering from street to street.”

During his lifetime, McKay lived in the Soviet Union, France, Spain, Morocco, and the United States. In both Home to Harlem and Banjo (1929), he captured the vitality of the uprooted black vagabonds of America and Europe.

In 1977, the government of Jamaica named Claude McKay the national poet, and posthumously awarded him the Order of Jamaica for his contribution to literature. In 2002, scholar Molefi Kete Asante listed Claude McKay on his list of 100 Greatest African Americans. McKay is regarded as the foremost progressive black intellectual of his age and his work influenced a generation of black authors including James Baldwin and Richard Wright.

Core Ensemble diversity programs would not exist without the help of our donors! Your support will enable us to create a Virtual Library of our Music Theatre Pieces that Celebrate Diversity and Social Justice. “Of Ebony Embers” will be just one of our virtual show offerings, to be made available to schools, community groups, colleges, and universities. THANK YOU!

This week we celebrate the birthday of Salvadoran Archbishop Oscar Romero, who was born August 15, 1917. A tireless champion of social justice for his people and outspoken critic of poverty and violent social repression. In the Core Ensemble show “Los Valientes” Romero  is portrayed by actor David Perez Ribada. Here is a clip of the Archbishop recalling his place of birth:

And watch as Romero expounds upon his concept of peace:

Core Ensemble diversity programs would not exist without the help of our donors! Your support will enable us to create a Virtual Library of our Music Theatre Pieces that Celebrate Diversity and Social Justice. “Los Valientes” will be just one of our virtual show offerings, to be made available to schools, community groups, colleges, and universities. THANK YOU!

Ida B. Wells, journalist and activist was born on July 16, 1862. Born a slave and freed by the Emancipation Proclamation, she battled sexism, racism and violence throughout her life. She is a 2020 posthumous recipient of the Pulitzer Prize for outstanding and courageous reporting on the horrific violence against African Americans during the era of lynching.

Actress Shinnerrie Jackson portrays Ida B. Wells in the Core Ensemble’s new show: UNBOUGHT. This post features video excerpts of Ms. Wells’ 1920 speech celebrating the passage of the 19th Amendment, granting Women the Right to Vote! Here is Shinnerie speaking about her first exposure to Ida B. Wells:

Ida B. Wells was one of the original founders of the NAACP and the National Association of Colored Women, created to address civil rights and women’s suffrage. She traveled internationally shedding light on lynching in the United States. She is remembered for her life and work as one of the most outstanding women of her day.

In 1893, Ida married famed African American lawyer Ferdinand Barnett. The couple had four children and throughout her career Ida balanced motherhood with her incredible activism.

Ida and her family lived at 3624 Grand Boulevard in Chicago from 1919-1930. She founded the first African American kindergarten in that city.

Core Ensemble diversity programs would not exist without the help of our donors! Please consider a contribution today to sustain our virtual library of shows illuminating social justice and to ensure that we may resume live performances when it is safe to do so.

Frida Kahlo, one of Mexico’s greatest artists, was born on July 6, 1907, but claimed that she was born three years later so that people would associate her with the Mexican Revolution of 1910. Our suggestion for Frida’s Birthday Cake: Mexican Cinnamon-Swirl Bundt Cake with Chili-Ganache Frosting!

Frida Kahlo left us a joyful legacy through her paintings that celebrated the colorful Mexican culture that she loved while fearlessly exploring gender, class, race and identity.

Frida Kahlo’s style was iconic: her famous unibrow shows a rebelliousness in an era when such a thing might have been plucked into submission. Frida adopted a traditional style of Tehuana dress: full skirts, embroidered blouses and a regal coiffure, accented with the flowers of Mexico: gardenias, dahlias, and bougainvillea.

Frida Kahlo was rumored to have had numerous affairs with both men and women – the list is impressive: Soviet revolutionary Leon Trotsky, Japanese sculptor Isamo Noguchi, actress Dolores Del Rio, Hungarian American photographer Nicolas Muray, artist Georgia O’Keefe, Mexican chanteuse Chavela Vargas – but the greatest of all her loves was Mexican painter and muralist Diego Rivera, whom she married not once, but twice! In this video clip from the Core Ensemble show “Los Valientes”, hear Paulo Quiros as Diego talk about his passionate relationship with Frida.

Your support of music theatre that celebrates diversity is more important than ever. Core Ensemble programs would not exist without the help of our donors! Please consider a contribution today to sustain our virtual library of shows illuminating social justice and to ensure that we may resume live performances when it is safe to do so.

sometimes known as “the Greenwich Village of South Florida”, is home base for the Core Ensemble.  Our community’s abundant interest in the arts is one of the reasons we love being here, and the glorious weather is the frosting on the cake! The Core Ensemble has received the designation “Artists in Residence” at St. Andrew’s Episcopal Church, an inclusive Christian community (www.standrewslw.net). Our five-event 2015-16  free series at St. Andrew’s  (100 N. Palmway, Lake Worth, FL 33460 includes:

In addition, community outreach programs bring us to farm worker communities around Palm Beach County for performances of “Harvest of Voices” in English and Spanish. Educational programs celebrating diversity and social justice will bring us to schools and afterschool programs in Palm Beach and Broward Counties. All of this is made possible by the Broward Student Enrichment Trust Fund, the Florida Department of State Division of Cultural Affairs (www.florida-arts.org) and the Cultural Council of Palm Beach County (www.palmbeachculture.com).

Our local collaborators include the Farmworker Coordinating Council of Palm Beach (www.farmworkercouncil.org), the Broward County School Board, the City of Lake Worth Martin Luther King, Jr. Celebration Committee, and the Lake Worth Interfaith Network (www.lwinterfaith.net). 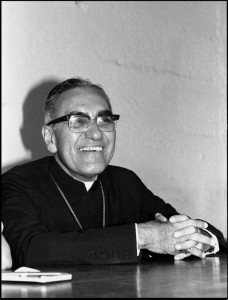 Earlier this year, the Vatican announced that Oscar Romero is now recognized as a martyr slain for his faith. The path to Romero’s possible canonization is now open. Archbishop Romero is one of ten twentieth-century martyrs honored with a statue in Westminster Abbey; he is also represented by a bust in Washington National Cathedral. 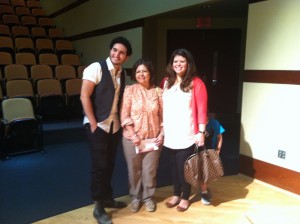 Los Valientes (The Courageous Ones) is a live music theatre work for singing actor and onstage trio of cello, piano and percussion. Based on the lives of three heroic Latinos, the show celebrates Mexican painter Diego Rivera, martyred Salvadoran Archbishop Oscar Romero, and Mexican-American outlaw Joaquin Murrieta – some say the Zorro character was based on this historical figure. You can find more information here: https://www.coreensemble.com/shows-on-tour/los-valientes – Or contact Margot for detail – margot@coreensemble.com.

On Monday evening March 30, the Core Ensemble finished the spring tour with a performance of Tres Vidas in Billings, MT. This landmark performance completed our cycle of performing in all 50 of the United States!

A post-performance supper at a local brew pub ended the season on a savory note: 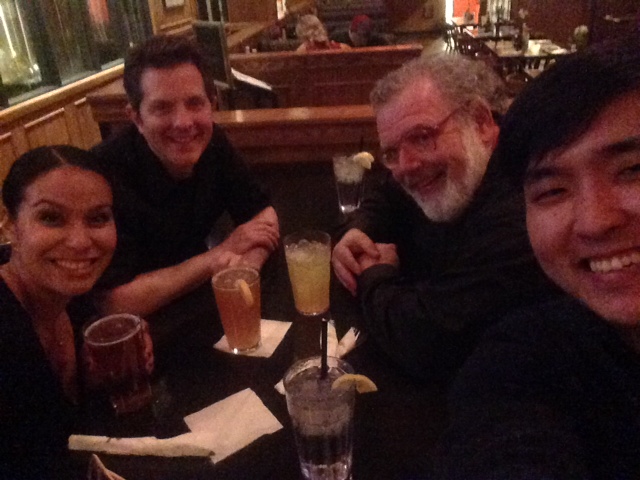 Leaving Montana with some Lakota wisdom from Little Big Horn: 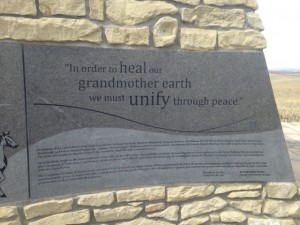 Thanks to all who performed, hosted, applauded, and appreciated our work! 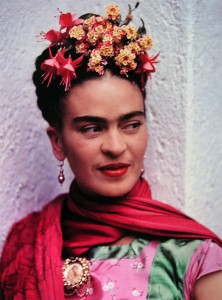 The Core Ensemble is celebrating Frida today – we love her vibrant colors, her potent symbolism, her rich interpretations of Mexican culture! Here's my favorite quote from Frida – have you ever felt this way?:

“I used to think I was the strangest person in the world but then I thought there are so many people in the world, there must be someone just like me who feels bizarre and flawed in the same ways I do. I would imagine her, and imagine that she must be out there thinking of me too. Well, I hope that if you are out there and read this and know that, yes, it's true I'm here, and I'm just as strange as you.”

One year ago today I invented a birthday cake for Frida. The goal was to use the flavors of Mexico that Frida loved. It turned out to be a Cinnamon-Swirl Bundt Cake with a Chili-Chocolate Ganache Frosting. It got the Good Housekeeping Seal of Approval from my friends Steve Arterburn and Patricia Masterman. Here's how it looked: 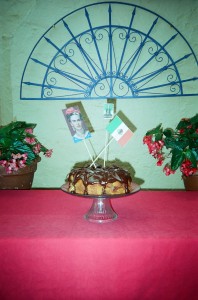 Frida’s actual birthday was July 6th, but she always gave her birth date as July 7th, to coincide with the beginning of the Mexican Revolution. 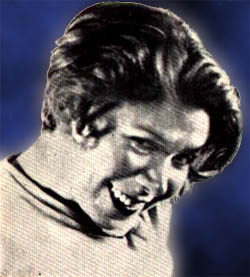 Alfonsina Storni was born on May 29, 1892.  She is considered to be one of the most important Argentine and Latin American poets of the modernist period.  Much of her work focuses on the repression of women.  She died in Buenos Aires on October 25, 1938. TheCore Ensemble celebrates Alfonsina in our touring show “Tres Vidas” (Three Lives): https://www.coreensemble.com/shows-on-tour/tres-vidas/

Alfonsina was an habitué of the famed Café Tortoni, a haunt of artists and writers. Perhaps she nibbled on Alfajores while enjoying the earthy and dramatic music of the tangueros.  Here’s a recipe for Alfajores that I tried: http://www.foodnetwork.com/recipes/ingrid-hoffmann/dulce-de-leche-cookie-sandwiches-alfajor-recipe.html 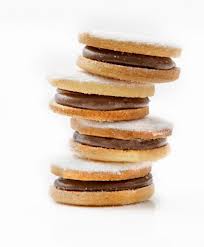 Always one to gild the lily, I took half the batch and dipped them in dark chocolate – to my mind, an upgrade on an already-sensational item!